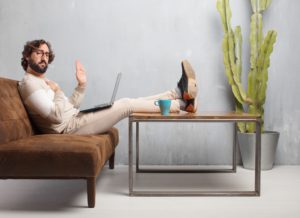 Offline advertising has so far been complex and costly. In order to reach their target groups, most companies use social media for advertising. Reports on impressions and co. quickly give an indication of how ads are received by audiences. But is this really the most effective way to promote to your target group? And how do consumers actually experience a strongly advertising brand?

Advertising on large billboards reaches a large mass of people. But to really reach target groups in a targeted and less time-consuming way advertisers mostly return to social media channels.

This is because placing ads on platforms such as Facebook, Instagram, LinkedIn, etc. on the personal devices of the target group is considered as particularly cost-effective. This is exactly where targeted advertising is expected: You take your mobile phone at hand, want to see the latest news from your friends or the interesting video content on Youtube - if there weren't always these interruptions in advertising... Social media is for social media - and not for annoying advertising!

This personal feeling is confirmed in current consumer surveys. Digital advertising via social media is currently not enjoying the best reputation: 40% of consumers surveyed find ads on Facebook highly annoying Moreover, even 57% of all respondents considering advertising on the Internet on mobile devices to be unacceptable.

Only 35% of social media advertising get noticed by target audience

A study by Lumen Research based on eye-tracking has recently revealed that only 35% of online advertising on social media is perceived at all - in addition, on average only 9% of the ads placed really get attentionDue to the abundance and everydayness of advertising, it is largely overlooked. So how about a channel that is not misused for obviously promoted advertising?

At FRAMEN, we have set ourselves the vision of creating exactly this: a pleasant advertising channel that enables advertisers to identify and reach potential customers - simply and flexiblyRight where they are. In fact, consumers also find advertising in "real life" to be the most positive (Statista 2017).

In real everyday locations such as cafés, grocery stores, doctors or even theatres, people spend their time naturally. There are already a lot of screens - mostly unused black holes on walls. FRAMEN connects screens with advertisers.  Thus, exciting content gets into the direct viewing angle of the audience.

Regardless of which screen it is. FRAMEN transforms every screen into an advertising space - be it a tablet at the reception of a hotel, a TV in a shop window or professionally mounted digital outdoor advertising in Times Square. This allows companies to easily and conveniently book the individually most effective spaces for their advertising to suit their campaign , and thus, to really reach their target groups.

Assuming a marketing agency wants to advertise in various restaurants and bars on behalf of a sportswear store during the Bundesliga soccer season. Without the FRAMEN solution this would have been a disproportionately high effort - one would have had to place rollups, posters or other advertising media in several restaurants. Logistically and financially too much effort!

With FRAMEN, the agency can now advertise at exactly those times at which the target group is in the restaurants. At the push of a button!

While the target group watches the football game in a bar, the innovative soccer shoe or the latest team jersey is discreetly presented on a screen. Nevertheless, the advertising message is perceived by the guests lastingly. Why is that? This is because people on the Internet are exposed to a flood of stimuli from advertisements and other rapidly changing information, a well-placed screen is a real eye-catcher in "real" life.

FRAMEN is therefore an innovative, more efficient alternative for all those who finally want to achieve the desired results for their advertising. Offline advertising that has a pleasant effect on the consumer. A digital and at the same time flexibly controllable channel that addresses advertising automatically (or manually) to the appropriate target groups.